Home Stories Haik Hovsepian Mehr, one of Iran’s most notable Christian pastors, was martyred for the faith

In Iran today, there is a systematic attempt to deprive churches of membership, literature, leadership training and development, communion with other believers, and the right to freedom of religion guaranteed by the international covenants of which Iran is a signatory. The oppression is not new, as the following story of one Christian martyr demonstrates. 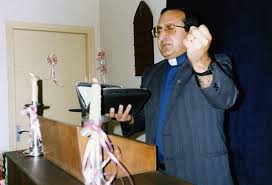 Haik Hovsepian Mehr was an Iranian Armenian protestant minister who pastored his first church in a suburb of Tehran in 1967. Not long after he completed mandatory military service near the Caspian Sea, and while stationed there, he established a house church. He became an outspoken apologist and evangelist. After the 1979 Islamic Revolution, Hovsepian was responsible for increased collaboration between evangelical churches within Iran.

Hovsepian spoke up for the rights of Christians in Iran. In 1993 he was one of only two church leaders who refused to sign a declaration stating that he would not allow Muslims or Muslim converts into his church. He also refused to sign a statement that Christians enjoyed full rights in Iran. Furthermore, Hovsepian compiled a detailed report on violations of religious freedom and invited Professor Reynaldo Galindo Pohl, the United Nations Special Representative to Iran, to visit the country and meet Protestant ministers and government officials to discuss these violations. He also met the Ministry for Islamic Guidance for Minorities to call for the government to respect the rights of religious minorities, as outlined in the 1979 Constitution.

In response, Bishop Hovsepian and the Assemblies of God denomination were ordered to comply with these directives:

1. Church services could not be held in Persian, the official language of Iran;

2. Church members must be issued membership cards and produce them upon attendance;

3. Membership lists, complete with addresses, must be handed over to governmental authorities;

4. Meetings must be confined to Sunday, not Friday the officially recognized day of Muslim worship;

5. Only members could attend Sunday meetings; and

6. New members could only be added to the membership and admitted to meetings once the Ministry of Information and Islamic Guidance had been notified.

Hovsepian declared that, “Never would [he or his ministers] bow down and comply with such inhumane and unjust demands” and that “our churches are open to all who want to come in.”

There are an increasing number of isolated Christians in Iran
He also protested about the treatment of his friend and colleague Mehdi Dibaj at the hands of the Iranian government. Hovsepian mounted a campaign for Dibaj, and on January 16, 1994, Dibaj was released.

Three days later, Hovsepian vanished from Tehran. His body was found with multiple stab wounds to the chest and later buried in an Islamic cemetery after police claimed they had been unable to identify him. His family was eventually notified of his death and arranged a Christian reburial. Hovsepian’s death made global news headlines due to his prominent role in Iran’s Church.

While the government initially denied all involvement, Iranian Christians and independent observers claimed Hovsepian had been murdered for his beliefs. His friend, Mehdi Dibaj, was killed six months later.

Hovsepian was not the last to be martyred. Since then, hundreds of Christians have been brutally tortured and some put to death. Even still, Iran’s underground church is growing. However, the pressure and persecution on house churches in Iran means there are an increasing number of isolated Christians in Iran — Christians who cannot have regular fellowship with other Christians. In most cases, these isolated Christians receive their teaching via Christian TV programs, which they can access by satellite.

21Wilberforce is matching compassion with action for those persecuted in Iran. Be a part of our IRAN 13:30 campaign, which is helping encourage and equip people of faith by making satellite programming in Iran possible.

1. Support 21Wilberforce’s IRAN 13:30 campaign to create Arabic-language training programs that will broadcast via satellite into Iran this summer

2. Watch a 3-minute trailer for “A Cry from Iran,” the award-winning documentary about Haik Hovsepian

3. Write to Christians in Iranian prisons