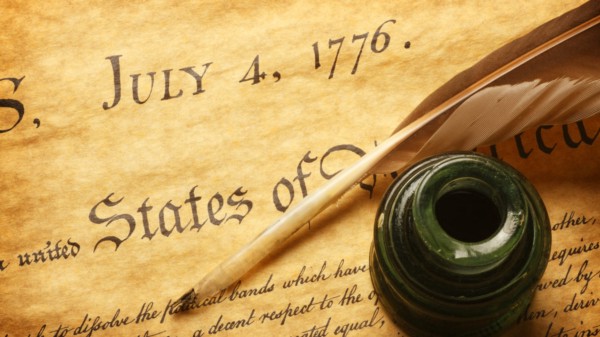 “We hold these truths to be self-evident, that all men are created equal, that they are endowed by their Creator with certain unalienable Rights, that among these are Life, Liberty and the pursuit of Happiness.”

This is one of the most familiar sentences in our American history, included in the Declaration of Independence, drafted by the 2nd Continental Congress on July 2, 1776, and adopted two days later. On this occasion, Founding Father John Adams wrote to his wife Abigail, “The second day of July, 1776, will be the most memorable epoch in the history of America.” He continued, “It ought to be commemorated as the day of deliverance, by solemn acts of devotion to God Almighty.”

Tomorrow, we celebrate Independence Day, nearly two and a half centuries after the seminal events of those sticky hot summer days in 1776. The inspirational declaration that flowed from that historic moment was backed — then and in generations since — with sacrificial and heroic actions that have provided unprecedented freedom. On this national holiday, it is fitting to ask, how will this freedom be maintained?

In his book, A Free People’s Suicide, Os Guinness speaks of the golden triangle of freedom, virtue and faith: freedom requires virtue, virtue requires faith, and faith requires freedom. Freedom by itself can actually lead to chaos and even anarchy. Thankfully, our early national leaders were wise enough to recognize the disciplines needed for freedom.

Benjamin Franklin said, “Only a virtuous people are capable of freedom.” John Adams wrote, “The only foundation of a free Constitution is pure virtue.” James Madison recognized our tendency for selfishness, writing, “There is a certain degree of depravity in mankind that requires a certain degree of circumspection and distrust.”

We can never write enough laws or hire enough police to insure proper behavior. There must be virtue or morals that come from within, formed by our faith.

How will this freedom be maintained?

The French historian, Alexis de Tocqueville, came to America 40 years after the Constitution was written. He claimed never to have understood the character of our nation until he heard righteousness preached from the pulpits. It is not surprising then that he is credited with this remark about the secret of America’s genius and power: “America is great because America is good. If America ceases to be good, she will cease to be great.”

Perhaps the greatest embodiment of America’s “goodness” is its embrace of religious freedom — the inviolable right of one’s own beliefs and conscience. In this conviction, American liberty has been a light to the world for 242 years. Yet, we know that each generation must seek to preserve and shine that light in its own time. Indeed, as a recent Pew Research Center poll has demonstrated, restrictions on religious liberty around the world continue to rise. Government restrictions and social hostilities by private actors are at a near-record high.

Our aim at 21Wilberforce is to honor God’s gift and America’s heritage of liberty by relentlessly championing religious freedom on a global scale — to demonstrate it abroad and to celebrate it at home.

In that letter from John Adams to his wife, he also wrote, “This date will be celebrated by succeeding generations as the great anniversary festival. It ought to be solemnized with pomp and parade, with shows, games, sports, guns, bells, bonfires, and illuminations from one end of our continent to the other, from this time forward forever more.”

Join us in celebrating our freedom tomorrow. Let us also cry out to Heaven and ask for mercy to love God with all of our hearts and love our neighbors as we love ourselves.

1. Read the Declaration of Independence

2. Pray for a restoration of compassion in our land

3. Intercede for a prisoner of conscience, such as Pastor Andrew Brunson in prison in Turkey